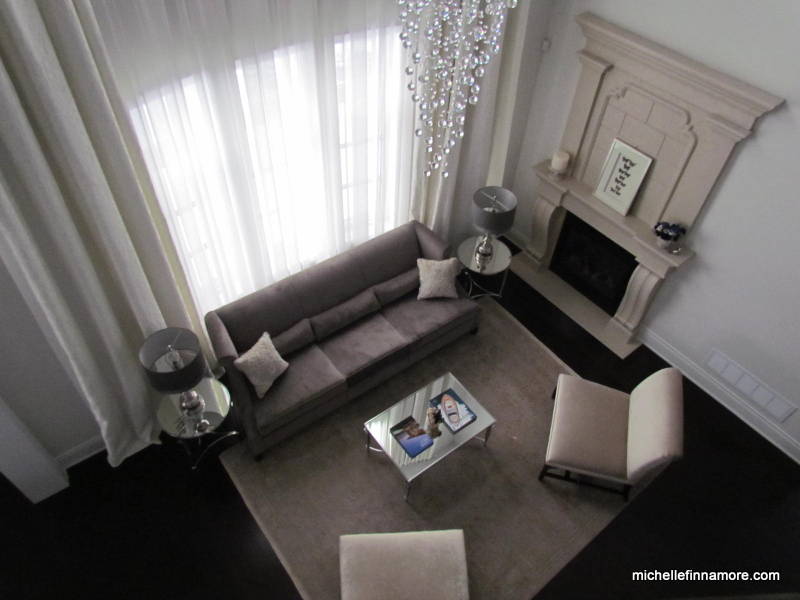 By Michelle Finnamore, Preparing your property for sale
(Toronto GTA, Alliston, Newmarket)
Comments 8
Staging in the Vaughan area we stage many homes with a balcony on the second floor looking down to the living or dining room below.There are few things to remember to allow the room to show well in listing photos and to attract your ideal buyers online to put this listing on their must see list.For a dining room place the rug in the centre of the room to allow the image to look balanced, pull the chairs away from the table at least 8" to show space, use larger scale table top decor to showcase the grandeur of the room. We used a wall mirror from Bombay on this table along with florals.You are also able to market the grandeur of a room by allowing the buyers looking online to imagine living in a home and seeing this beautiful view each day. Create symmetry in a room by balancing the sofa... 06/21/2017

Wow! 2 level Penthouse Condo in Woodbridge with a private pool!

By Michelle Finnamore, Preparing your property for sale
(Toronto GTA, Alliston, Newmarket)
Comments 3
Staging in Vaughan we have staged some luxurious homes but this condo has it all. Ever wish you could just take a midnight dip without having to go all the way to the pool area? We can say that your wish has come true with this two storey penthouse condo.  Located at 141 Woodbridge Ave. in downtown Woodbridge across from Market Square it is a two level condo with a self contained private pool to enjoy as well as a  hot tub. This is a unique condo in Woodbridge with an extra, extra large outdoor living space so that you can host dinner parties inside and then relax with a midnight dip in your own private pool or hot tub!  All we did in this condo was edit the amount of furniture and decor accessories to allow the views, the space and the light fixtures take centre stage. Sometimes it is ... 02/01/2015

Can You believe That The Majority Of Ontarians....?????

By John Rossi
(RE/MAX West Realty Inc.,)
Comments 2
(56%) of Ontarians Believe Harmonized Sales Tax Applies to Resale Home. The introduction of the Harmonized Sales Tax in both Ontario and British Columbia on July 1st 2010 has been widely cited by real estate professionals and analysts as one of the major factors affecting a slowdown in housing sales. This theory seems to be supported by a recent survey commissioned by the Ontario Real Estate Association (OREA) and conducted by Ipsos Reid, which shows that 56% of people in Ontario believe that the new HST applies to the cost of resale homes. Read More With the average resale home price sitting at $333,000 in Ontario, this means that many would expect to pay an additional $40,000 in sales tax if they bought a home at that value. The reality is that there is no HST collected on th full pur... 12/03/2010

By Sham Pathania
(SAVE MAX FIRST CHOICE REAL ESTATE INC.)
Comments 0
Greater Toronto REALTORS® reported 6,310 sales through the Multiple Listing Service® (MLS®) in September 2010. This represented a 23 per cent decrease compared to the 8,196 sales recorded during the same period in 2009. Through the first nine months of the year, sales amounted to 69,069 - up four per cent compared to the first three quarters of 2009. "The level of sales in the second half of 2010 has been lower, representing a balancing out period following record levels of sales in the latter half of 2009 and first few months of 2010. The average price for September transactions was $427,329- up five per cent compared to the average of $406,877 reported in September 2009. The average selling price through the first nine months of the year was $429,657. 10/07/2010

By Carl Minicucci, Broker
(Humber Valley Realty)
Comments 0
Recently updated, this publication by the Economic and Technology Development Department of the City of Vaughan provides a broad insight to the City including the community of Woodbridge.A snapshot of the contents includes the following:QUICK FACTSINTRODUCTIONLOCATIONWORKFORCEDEMOGRAPHICSBUSINESS COST ADVANTAGESBUSINESS SECTORSREAL ESTATE MARKETSDEVELOPMENT OPPORTUNITIESCOSMOPOLITAN AMENITIES & GREAT COMMUNITIESClick HERE to download your PDF copy. 03/10/2008