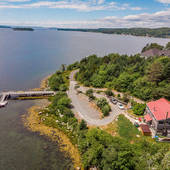 The Bay of Fundy - Vote for as " One the seven wonders of the world!"

By Paul Viau, Nova Scotia Real Estate Blog + Photo Services
(Nova Scotia Real Estate Blog)
Today I took a drive down past Kentville to Hall's Harbour to see the low tide! As part of the Bay of Fundy they enjoy the world's highest tides.  I had my camera with me and could not help but to grab these spectacular shots. The tides are 53 feet in the bay of Fundy!  That's about 9 times the average tide on the other side of the province in Halifax; where I'm from. It's really quite a site to see the boats on their side! Here is a view from on top of the wharf looking at the shore line. The Bay of Fundy has been nominated as one of the seven wonders of the world.  The Swiss-based non-profit New7Wonders Foundation was established in 2001 by the Swiss-born Canadian filmmaker, author, and adventurer Bernard Weber.   Vote for the Bay of Fundy as one of the seven wonders of the world. The... 09/05/2011
Comments 7
Explore Kings County, NS
View all cities
Kings County, NS Real Estate Professionals