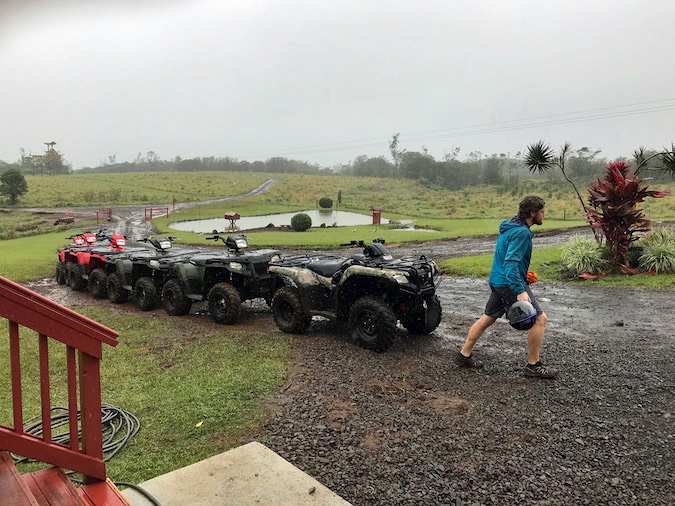 ATV Tour on Big Island is a Blast

By Elizabeth Weintraub Sacramento Realtor Top 1%, Put 40 years of experience to work for you
(RE/MAX Gold)
Comments 12
I wish I could say that no muscles are involved with riding ATVs on the Big Island, but that would be somebody else talking. Not me. Every bone in my body aches today. And it's not just because I attended a stretch class or spent a good amount of time on the rowing machine the other day at my new club.It's because I am so out of shape that really pressing pedal to the metal yesterday on the ATVs wore me out. I was covered in mud from head to foot. I outperformed everybody who was on that tour. Held back, and then let 'er rip. Bounced over hills, almost got myself thrown from the bike, but what a ride!! You can read more in my personal blog today at this link: If You Want to Ride ATVs on Big Island. 12/20/2018

By Sun City Grand Homes Surprise AZ Real Estate Leolinda Bowers Designated Broker Leolinda Realty, Sun City Grand in Surprise Arizona
(Leolinda Realty)
Comments 0
My uncle Fernando Rivera JR was named after my grandfather John Fernando Rivera. He was born in Hilo Hawaii on September 28, 1929 and was one of 13 children and youngest brother to my mother. Uncle Fernando was a POW in the Korean War. My aunties vividly remember the day in 1950 that the army officer came to their house with the "yellow envelope" informing my grandparents that their son was missing in action and probably captured. He was just missing they thought, there was hope. So they waited. Everyone had hope, perhaps someday Uncle Fernando would return home. In 1954 my grandparents received the news. After 4 years of waiting even the news delivery of my Uncle Fernando's death was sad. My Auntie Anita said that a large "manila envelope" came in the mail. Auntie gave it to my grandfa... 05/26/2014

By Sun City Grand Homes Surprise AZ Real Estate Leolinda Bowers Designated Broker Leolinda Realty, Sun City Grand in Surprise Arizona
(Leolinda Realty)
Comments 4
Hilo Hawaii is HULA Hawaii! The Merrie Monarch Festival honors King David Kalakaua, Hawaii's last king. King David was born on November 16, 1836 in Puawaina, Oahu. He was elected King of the Hawaiian Islands in 1874.  Hawaiian culture and arts reached new heights during King Kalakaua's reign. The King was extremely talented; he was an inventor, musician and composer. King Kalakaua is know as the "Merrie Monarch". On January 20, 1891, his reign came to an end. The yearly Merrie Monarch Festival is dedicated to the memory of King David La'amea Kalakaua. This year is the 50th year celebration of Merrie Monarch Festival that's held in Hilo, Hawaii. Tickets for the 3,000 seats went on sale on December 26, 2012. Ticket envelopes could not be postmarked prior to December 26. Over 20,000 ticket... 04/05/2013

By Sun City Grand Homes Surprise AZ Real Estate Leolinda Bowers Designated Broker Leolinda Realty, Sun City Grand in Surprise Arizona
(Leolinda Realty)
Comments 9
Respect After Death I am with family in Hawaii celebrating the life of my uncle who past away a few days ago. My mother had two brothers, my uncle Fernando was MIA in the Korean Conflict. Her other brother, my uncle Alex was a popular musician in the Big Island of Hawaii.This morning my cousin Charlotte prepared his flowers. Aroma of the huge floral sprays and arrangements circulated the workroom in her garage. As I watched cousin Charlotte said, "these flowers are not for the dead, they are for the living". It's a way to show respect to the family for the loss of a loved one. As we respect life, respect death. Respect for the family after death, do it frequently.       My uncle Alex was graced with a beautiful voice, one who serenaded thousands of people in Hawaii with his Puerto Rican... 09/23/2011

By Georgie Hunter R(S) 58089, Maui Real Estate sales and lifestyle info
(Hawai'i Life Real Estate Brokers)
Comments 9
Flowers from the Big Island - $5 anthurium bouquets I don't know how they can sell them so cheap!  Not only do you get a beautiful bunch of tropical flowers for 5 bucks, you also get the ti leaf wrapped can they come in!  If I could only put some in my luggage!  This was a flower market in Hilo that we found while touring the waterfront.  I can only imagine what a bouquet like this would cost in NYC. Anthuriums are really interesting and exotic looking, almost like plastic flowers.  They make great cut flowers that last a long time.  The Big Island is famous for tropical flowers like anthuriums and orchids. View Larger Map search for oceanfront Maui properties right here. Search the Maui MLS here  call or text me 808 283-0635 ~ EMAIL Georgina M. Hunter Realtor(S) e-Pro SFR 08/16/2011

By Ryan Tongg
(Valcore Realty Group)
Comments 0
Zoning is AG 3-A. This is See Property Details Call: for more information on this or any other property. Visit Property Website Zoning is AG 3-A. This is approx 36 acres of subdividable land in Waiakea Homestead Series 1. 906B Laula Rd, Hilo, HI 96720 List Price : $ 575,000 I want to see this property. Courtesy : Valcore Realty Group Email Me Now 808-596-2888 Listing data of Broker from MLS is deemed reliable, but not guaranteed and is made available for personal and non-commercial use. powered by Listings-To-LeadsL2L 02/15/2011

The Best Bed and Breakfast in Hilo, Hawaii: The Palms Cliff House Inn

By Elizabeth Weintraub Sacramento Realtor Top 1%, Put 40 years of experience to work for you
(RE/MAX Gold)
Comments 10
You might wonder how I can say The Palms Cliff House Inn is the best bed and breakfast in Hilo, Hawaii, when it's the only bed and breakfast I have stayed at, but it's not just my opinion. The Palms Cliff House Inn was voted the best bed and breakfast in Hilo by readers of the Hawaiian Tribune-Herald for 2010. This view is from room #5 on the second floor. There are only 8 rooms, four on each floor. This is the view of the front of the home. It is owned by John and Michelle Gamble who moved to Honomu 10 years ago. John said they were on vacation from Denver and were not intending to buy a home in Hawaii. But they stumbled across this Victorian and fell in love. So, they bought it and built the bed and breakfast quarters attached by a veranda. It sits way back from the road and is locat... 12/30/2010

By Elizabeth Weintraub Sacramento Realtor Top 1%, Put 40 years of experience to work for you
(RE/MAX Gold)
Comments 12
This is the view from my balcony. I told my husband I could stare at this view for the rest of my life, and he looked at me like I was nuts. What can I say? He is just not an island guy. Although, he did mention that there is a reporter job position open at a small paper on Kauai that probably pays all of $28,000 a year, so there is still hope. No city anywhere in the world is compete without being home to a farmer's market. This is the farmer's market in Hilo. Good thing there are tents everywhere because this is the wet side of the Big Island, and it definitely rains a lot. My neighbors behind my home in Land Park in Sacramento grow those red thingies. We took off down this tiny, curvy road that used to be the main highway. It's hardly big enough for two cows to pass each other. A fe... 12/23/2010

By Sun City Grand Homes Surprise AZ Real Estate Leolinda Bowers Designated Broker Leolinda Realty, Sun City Grand in Surprise Arizona
(Leolinda Realty)
Comments 19
Reminiscing of Hawaii Whenever I feel homesick for the Big Island, I pull out some of my favorite pictures.  This is Kalaniapia Waterfall on the Big Island of Hawaii north of Hilo. The cascading water is melodic at anytime of day or night. People frequently swim in the bottom of the falls. I may be away from Hilo, but Hilo is always in my heart. 10/06/2010

Take a walk on the wild side...

By Johnny McElree
(Live Your Dreams!)
Comments 0
Have you visited Namaste lately?... Say Aloha to Namaste! A 450 pound white bengal tiger at the Panaewa Zoo in Hilo! You (and bring the kiddies) will enjoy this wonderful attraction. Namaste's feeding time is 3:30 pm every day. He is a descendent from Mohan, a wild white Bengal tiger caught by the Maharaja of Rewa in 1951. Come & visit Namaste and all his friends! The zoo is open daily except for Christmas and New Years Day. There is no admission charge, however, donations are accepted and greatly appreciated. Their petting zoo is open every Saturday from 1:30 to 2:30 p.m. Panaewa Rainforest Zoo, the only zoo in America situated in a tropical rain forest. www.hilozoo.com     Johnny McElree johnny@johnnymcelree.com www.johnnymcelree.com Follow me on: Twitter: @livininparadise Facebook: h... 07/07/2010

By John Petrella
(Local Hawaii Real Estate)
Comments 0
Below are the March 2010 Land Sales for Hilo. You can view and download the past 12 months of Hilo Land Sales data at: http://www.HiloLandAndHomes.com/ (Data Source: Big Island MLS) Stop by, visit and talk story at our office on the Big Island of Hawaii!   John Petrella, ABR®, GRI, SFRREALTOR® Broker/Owner Direct: 808.640.3953Local@LocalHawaiiEstates.com Local Hawaii Real EstateHonesty • Integrity • Commitment 159 Keawe St., Suite 1Hilo, Hawaii 96720 REALTOR® is a federally registered collective membership mark which identifies a real estate professional who is Member of the NATIONAL ASSOCIATION OF REALTORS® and subscribes to its strict Code of Ethics. 05/03/2010

By John Petrella
(Local Hawaii Real Estate)
Comments 0
Below are the March 2010 Home Sales for Hilo. You can view and download the past 12 months of Hilo Home Sales data at: http://www.HiloLandAndHomes.com/ (Data Source: Big Island MLS) Stop by, visit and talk story at our office on the Big Island of Hawaii!   John Petrella, ABR®, GRI, SFRREALTOR® Broker/Owner Direct: 808.640.3953Local@LocalHawaiiEstates.com Local Hawaii Real EstateHonesty • Integrity • Commitment 159 Keawe St., Suite 1Hilo, Hawaii 96720 REALTOR® is a federally registered collective membership mark which identifies a real estate professional who is Member of the NATIONAL ASSOCIATION OF REALTORS® and subscribes to its strict Code of Ethics. 05/02/2010