By Peter Larson
(Granite Bridge Homes)
Would you like to ask your San Diego real estate related questions without talking to a Realtor or a Loan Officer? I have a new page on my website that is set up for you to post your real estate questions or comments and get answers without having to give your name or any contact information. I will do my best to post helpful answers to any of the posts on this site. I would love to hear your thoughts and questions! Please visit: www.sandiegohomes.squarespace.com/real-estate-blogs Thank you for your interest!Peter LarsonGranite Bridge Homes  11/15/2007
Comments 2

By Mike and Dawn Lewis, The Lewis Team at Keller Williams in San Diego CA
(The Lewis Team at Keller Williams)
Mission Beach Real Estate Market Conditions for November 2007Fastest Home Search in San Diego with best maps FREE!  Your Mission Beach Real Estate Experts 92109 includes Mission Beach, Mission Bay, Crown Point and Pacific Beach.Search all Mission Beach Homes - Search the San Diego MLSMission Beach is at the South West Corner of Zp Code 92109 and is surrounded by the Pacific Ocean and Mission Bay. This is a wonderful area of San Diego to live if you love the beach and beach activities. There's a great amusement park called Belmont Park with games, rides and a world famous roller coaster. Mission Beach is packed with beach goers, roller bladers, bike riders and has a great Southern California Beach Energy! Check out Mission Beach and all it has to offer at Dawn Sells San Diego.    Homes f... 11/15/2007
Comments 4

By Mike and Dawn Lewis, The Lewis Team at Keller Williams in San Diego CA
(The Lewis Team at Keller Williams)
House Values San Diego Downtown 2007 NovemberWhen selling your House in Downtown San Diego please contact us to find out what your Downtown San Diego House is worth. The value of your San Diego  House is based on factors including the facts of the market and current real estate trends. House values are also based on the the condition of your house, upgrades, options, views and many other factors. We put together a CMA "Comparative Market Analysis" for you free with pertinent facts about your specific market. Accurately pricing your Down Town San Diego House is one of the most important parts of the agent interview. Pricing your house too low or to high can impede the sale of your house in San Diego. Contact us today to find out your House Value in Downtown San Diego for a FREE today!If ... 11/15/2007
Comments 3

By William Johnson, Retired Real Estate Professional
(Retired)
New computerized information will be available soon for tourists and citizens of San Diego in Balboa Park via 3 new 12 foot high information kiosks that have been in the planning stages for over 10 years. Achieved with private funding,Wi-Fi services will be also be available as the these new information kiosks will be one of the new "Hot Spots" in San Diego.The computerized kiosks located in key strategic places in the park will provide detailed information on all the museums, the gardens, retail shops, and the available restaurants throughout Balboa Park. The other featured services of these kiosks will include the ability of visitors to send an e-mail postcard from Balboa Park to friends and family wherever they may be and also to be able to access the Internet with its Wi-Fi Hot Spot... 11/15/2007
Comments 18 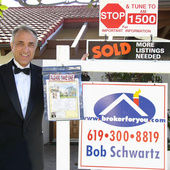 By Terry McComas
(Pink Flamingo Mortgage)
Ban the Ban III - Will They Never Learn!!  Well the City Council is at it again. The Police Chief said we don't need it; the Mayor said I don't want it; but the City Council insists on taking away the rights' of 99.99% of the citizens to try and police the 0.01% who cause trouble.How can that make sense??Yes, the remaining law abiding citizens will follow your new law, but the trouble makers who are already breaking several laws to cause trouble, will not be impressed with your newest proclamation. You need to "police" the situation and you will solve the problem. Yes, it costs money. When you attract a Quarter Million people to the beach, 6 million per year, you need to provide services at the 'event.' Use the same ratios you would require of the X Games; or a Concert. Hold yourself a... 11/12/2007
Comments 1 By Gregg & Debbie Neuman
(Prudential California Realty)
San Diego, while miles from the Britney/Paris hotspots of L.A. has a few hotspot clubs of our own. So, f you think you can handle partying like the Hollywood elite, check out these five Gaslamp and Little Italy nightclubs that are attracting San Diego’s more beautiful and most eligible.   Side Bar Before there was Stingaree, there was Side Bar. Owned by the same team of powerhouses, the Gaslamp club is a smaller version of its prodigious son, yet in many ways it’s just as swanky. Because of Side Bar’s limited size, you don’t feel as if you’re lost in the entire designer-garbed population of New York City, as you do with Stingaree and other massive establishments. You have the chance to skim around, check out the big spenders, and possibly find one to latch on to for the extent of the ev... 11/07/2007
Comments 0
<< Previous 1 2 … 285 286 287 288 289 290 291 292 293 … 296 297 Next >>
Explore San Diego, CA
San Diego, CA Real Estate Professionals