Home Construction: What is a "Ballcock"?

Really? Is that a relative to the "Petcock'?

Oh how the mind can wonder! I will avoid the overflow today! Thanks Jose!

Im not going to go there.

Tony and Suzanne Marriott, Associate Brokers No toilet should be without one.

In Britain, I believe the phrase is twig and berries.

Oh my *tsk tsk* - do you kiss your wife with that mouth?

Antiquated item no longer manufactured.  It was invented in Mexico by a priest with a level attached to a floating valve used as water level control device inside the toilet.  George Washington did not have the chance to use it as America did not have running water then.

Today it was replaced by an el cheapo styroform found in Fluid Master. The kit is NG as the valves are often defective. It leaks. Go back to the Ballcock design.

Where are you heading with a question like this?

I'm not going there!

Something Tidybowl man relied on to maintain proper water levels. 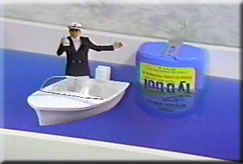 prevents a toilet from running....

This is pure bathroom talk. My toilet has one, does yours?

If it isn't in your toilet tank you might have a problem.

Into the toilet goes the answer ....

I'm sure you're looking for provocative wise-guy responses here.

They're placed on the roof top and anytime kids hit baseballs near the house or windows it says "cock-a-doodle-do" to warn you about the incoming ball.

Does this have to do with plumbing, on a toilet?

I know this one.

Tony and Suzanne Marriott, Associate Brokers - is that two words or just one?

I've had to replace a few in the toilet.

There are going to be some very funny answers to this one.

You know what they say about a 'Bird in the hand'!

Ah yes, every home has at least one!

A vital item for many households.

Have you looked in your toilet tank?

Have you been consulting with Barbara Todaro on ideas for questions to ask?

A ballcock (also balltap or float valve) is a mechanism or machine for filling water tanks, such as those found in flush toilets, while avoiding overflow and (in the event of low water pressure) backflow. The modern ballcock was invented by José Antonio de Alzate y Ramírez, a Mexican priest and scientist, who described the device in 1790 in the Gaceta de Literatura Méxicana.[1] It consists of a valve connected to a hollow sealed float by means of a lever, mounted near the top of the tank. The float is often ball-shaped, hence the name ballcock. The valve is connected to the incoming water supply, and is opened and closed by the lever which has the float mounted on the end. When the water level rises, the float rises with it; once it rises to a pre-set level, the mechanism forces the lever to close the valve and shut off the water flow. This is an example of negative feedback and of proportional control.