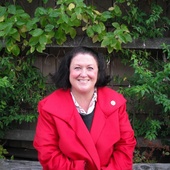 Get to know Robin Risley

Wonder and discovery is how I grew up on the Willamette River. I was blessed with Risley ancestors traveling over "The Oregon Trail" along the Barlow Road in 1845. Two donation land-claims were established in 1852 along the river in the Oak Grove area. Today, the Risley home is of historic significance, The Oak Grove Garden Club over-sees the care of Risley Landing Gardens and there is a Risley Park just located off of Risley Avenue near River Road. The Risley Reading Room is located at the Milwaukie Library. Love and respect of our Oregon Heritage and History run deep in our family.

I received a Bachelor of Arts Degree with a concentration in Scientific Illustration from Oregon State University.

In the mid-seventies, I moved to the North Oregon Coast and have found where I belong. It's difficult to experience a more breath-taking spot, to live,  than Cannon Beach.T he community's spirit is friendly, bright and energetic. It is a wonderful place to work and raise a family. I have a beautiful daughter and son-in-law, Risley and Dylan Wilkinson who divide their time between Portland and Cannon Beach. In September of 2010 Kallen Risley Wilkinson was born. and we became grandparents. What a delight he has been!

In 1989, I graduated from Norm Web Real Estate School in Salem, it gave me a strong foundation and valuable contacts for the work that I have done ever since.

In 1993, I received a Broker's License now called a Principal Brokers license.

Education has always been an important priority to me. I hold the Graduate Realtor Designation "GRI" and  The Certified Residential Specialist Designation  "CRS".....considered the "PhD" of Real Estate. Nationally only 3% of all realtors have qualified to hold this designation. Presently, my partner, Tommy Huntington, and I serve on the CRS Board of Directors as District Vice Presidents for the North Oregon Coast from 2005-2013. We were awarded in 2011 "The CRS of the Year in Oregon".  Being honored by your peers is the best kind of complimen. I received Clatsop Association of Realtors' "2012 Realtor of the Year Award", "Top Producer of the Year Award" for Clatsop County is also a very special designation.

I serve on the Cannon Beach Parks and Community Service Committee.

On July 6, 2010 Cannon Beach City Council made appointments to the Tourism and Arts Commission (TAC). The TAC is comprised of five individuals. I will serve a three year term. Our mission is to: develop rules and procedures regulating the distribution of the Tourism and Arts Fund which is comprised of 70% of the 1% lodging tax increase effective July 1, 2010 so that the distribution of this fund...will be dedicated to tourism and tourism related facilities. It is an honor to serve on this commission.

Tommy Huntington and I have been partners for 18 years. We share the joys and  mental challenges that real estate offers. Each day can be a new adventure. We specialize in resort and second home beach properties. Kamali Sotheby's International Realty offers the networking tools to help sellers and buyers attain their dreams. If you have anyone interested in buying or selling in the Cannon Beach, Arch Cape, Seaside or Gearhart communities; we "really know the neighborhood" and welcome your referrals.

Grab your earth friendly bag and come to the 12 Days of Earth Day!

Cannon Beach has a full time population of 1700 residents as per the 2011 census. One tends to purchase a home, open a business and stay sometimes for two or three generations.........and so my market is primarily second homes. My blog will reflect the life style that our visitors and future residents seek. Like a magnet, we are drawn to the wild Pacific Ocean...the "upper left edge" as the locals call it. We are a well educated arts community valuing nature and all it has to offer. Fine dining abounds with natural seasonal ingredients. Please stay tuned for the special events and issues that make our town come alive!