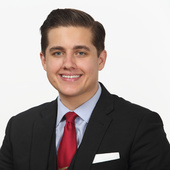 Get to know Paul Messplay

After graduating from the Mathematics and Science Center at Clover Hill High School, Paul Messplay entered the Political Science Department at Virginia Commonwealth University in 2006, where he began his double major in Political Science and International Social Justice Studies. During his undergraduate tenure at Virginia Commonwealth University, Paul Messplay held positions as Co-Chair and Screening Director of the VCU Arabic Film Festival, and as the Founding Treasurer of the Arabic Club. Paul Messplay was accepted into the Accelerated Master of Public Administration Program at VCU in 2009. While in graduate school, Paul Messplay worked as a graduate teaching assistant and held executive internships with the Governor-elect's Transition Team, the Governor's Office, and the Financial Office of the Maymont Foundation. Paul Messplay graduated with laudatory honors in 2011 after his induction into the Pi Alpha Alpha National Honor Society for Government and Public Affairs.