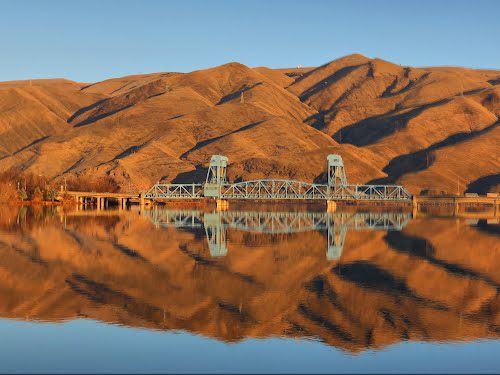 Get to Know Patty Luther

Welcome to my profile the Lewis Clark Valley  Gateway to Hells Canyon  where you will learn all about this fantastic City of Lewiston and City of Clarkston and about the wonderful Idaho-Washington Real Estate available including homes, farms, investment and commercial real estate and an entire MLS Search that is updated daily.

Patty is licensed in Idaho and Washington and serve the Lewis Clark Valley including the major cities of Lewiston Idaho, Clarkston Washington, Asotin Washington and the surrounding Lewis Clark Valley area on the border of Idaho & Washington.  Patty has trained many Realtors as owner of her own Real Estate company RE/MAX of the Valley for 15 years.  She has spent the past 32 years developing a system that focuses on clients needs and takes care of them before, during and after the closing.  Patty has learned to surround herself with excellent consumer service focused professionals which include mortgage lenders and home inspectors, title companies, appraisers.  Patty prefers to use the same companies that are tried and true and will be here when the real estate market is strong or weak and that place customer service, integrity and honor at the head of their list of goals they strive for.

Owner/Broker/Manager of the company until she sold the Business Franchise to Mountain West in November of 2005. Since Patty sold her business she has worked on what she loves to do and that is to List & Sell Real Estate.  Patty is a licensed Real Estate Broker in both States, IDAHO & WASHINGTON.

Patty has put together a Team...  October 1, 2007 they opened a new Real Estate Company in the States of Washington & Idaho... Rock-n-Roll Realty, now known as RE/MAX Rock-n-Roll Realty.    Helping your move be a pleasant move and stress FREE!

SERVING:   Lewiston A city which has now grown to a population of 31,894 when Lewis and Clark first visited these lands made home by the Nez Perce tribe they called it "paradise". In that respect not much has changed since those early days as Lewiston and its surrounding area still holds true to its wondrous beginnings. Warm coastal air pours through river valleys providing an ideal climate for wildlife and residents both. The summers stay mild, usually in the low 90's and the winter temperatures in the 40's are rarely harsh, making a great environment for many activities year round. Founded in 1860, named for Meriwether Lewis of the famed Lewis and Clark expedition, Lewiston is Idaho's only seaport as well as its oldest city. In 1863 Lewiston was made the state capital of Idaho, a title which it retained for only a few years until the capital was moved to where it resides today in Boise.   City Overview As of 2012, Lewiston's population is 31,894 people.  Since 2000, it has had a population growth of 4.92 percent. See Lewiston demographic data.  The median home cost in Lewiston is $165,100. Home appreciation the last year has been -1.82 percent.  Find more data on Lewiston Data.  Compared to the rest of the country, Lewiston's cost of living is 12.78% Lower than the U.S. average. See full report on Lewiston Cost of Living.  Lewiston public schools spend $4,829 per student. The average school expenditure in the U.S. is $5,691. There are about 17.5 students per teacher in Lewiston. Learn about Lewiston School District.   The unemployment rate in Lewiston is 7.00 percent  (U.S. avg. is 8.60%).  Recent job growth has decreased by 2.04%.   BUT new business is coming in still with a new Maverick being buit on the corner of Bryden and Thain Road.  And the Newly Built Schweitzer Engineering Laboratories opened in early 2012; the new 105,800 square foot mixed-use engineering office and manufacturing facility on 25 acres in the Lewiston Business and Technology Park. Employing 125 now and expected to employ up to 250 people at the site. Other SEL manufacturing locations include Pullman, Washington; Lake Zurich, Illinois; and San Luis Potosí, Mexico. The company maintains engineering and support offices in 47 additional domestic locations and in 35 international locations. SEL Lewiston Plant Energizes Production

Clarkston WA  As of 2012, Clarkston (zip 99403) population is 19,502 people. Since 2000, it has had a population growth of 4.35 percent.  Located at the confluence of the Snake and Clearwater Rivers, surrounded by gentle rolling hills, the Lewis-Clark Valley is located 465 river miles from the Pacific Ocean and is at the head of the navigation system of the Columbia/Snake River. The area is often referred to as the "Banana Belt" due to the area's low elevation (731 feet above sea level). Year-round warm weather and mild winters allow golfing all year. You can choose from an array of activities such as water skiing, sailing, fishing, swimming, walking or riding along miles of paved levee pathways, or camping at a riverside park.

City Overview.  Population is 19,502  people.  Since 2000, it has had a population growth of 4.35 percent.  See Clarkston demographic data.  The median home cost in Clarkston is $137,000. Home appreciation the last year has been -1.85 percent. Find more data on Clarkston Data.  Compared to the rest of the country, Clarkston's cost of living is 0.40% Higher than the U.S. average.  See full report on Clarkston Cost of Living.  Clarkston public schools spend $5,026 per student. The average school expenditure in the U.S. is $5,691. There are about 21.2 students per teacher in Clarkston. Learn about Clarkston Schools and Education.  The unemployment rate in Clarkston is 7.10 percent(U.S. avg. is 8.60%). Recent job growth is Negative. Clarkston jobs have Decreased by 4.46 percent.

Asotin WA 99401 ~ Asotin is the county seat of Asotin County, Washington,  The population of the city was 1,251 at the 2010 census. It is part of the Lewiston, ID–WA Metropolitan Statistical Area.

Kamiah IDAHO, is nestled on the beautiful banks of the Clearwater River, surrounded by scenic foothills.  Heritage meets the modern day world as the forward looking residents of this quaint town focus on the future without losing site of the past.   Kamiah Chamber   Before history was recorded in this part of the west, Kamiah was the winter home of the Nez Perce Indians. It was here they came to fish for steelhead, a mainstay in their diet, and to manufacture "Kamia" ropes, hence the name Kamiah, meaning the place of "many rope litters"

Orofino IDAHO, is a land of all seasons, with something for everyone the whole year round.  Orofino Chamber  Beautiful mountains, crystal clear rivers, babbling brooks and turquoise lakes surround this cozy town of just over 3,200.   Orofino got its start in 1898 due to the inflow of settlers and the construction of the railroad up river. The name Oro Fino means "fine gold" in Spanish. It was taken from a gold rush town called "Oro Fino" that was located near Pierce that later burned down. The post office objected to a two- word name and the town joined the two words and it became Orofino.

Grangeville IDAHO   Grangeville Chamber   There’s a little town in the heart of Idaho where the spirit of the West is alive and well. Grangeville … right in the middle of the state that’s second only to Alaska in designated wilderness areas.   IT’S FEATURES  ~Idaho … the Gem State that boasts the deepest gorge in North America, Hells Canyon, which is less than an hour from Grangeville Idaho.    IT’S RIVERS  Five other rivers flow nearby, three of which are also designated wild and scenic: the Snake River, Salmon River, Clearwater River, South Fork Clearwater River, Selway River and Lochsa River.  IT’S PUBLIC LANDS   Grangeville, surrounded by five wilderness areas and four national forests, totaling about 5 1/2 million acres include the Nez Perce National Forest, the Clearwater National Forest…  IT’S HISTORY Grangeville Idaho is a town which enjoys a fascinating history, complete with gold rushes, Indian wars, railroad feuds and all of the colorful lore of the Old West.  More Information

Boise is our capital and one of the fastest growing cities in the nation Beautiful parks, restaurants, and bike path border the Boise River which runs through the heart of Boise. City of Boise

almost 11 years ago
bookmark_border
~ 3 years in Business ~ Rock-n-Roll Realty Lewiston Idaho Clarkston W ... ~We can't tell everyone we have worked with in the past 3 years how thankful we are to have done business with you.  Lenders and title companies Thanks for your ...
over 10 years ago
bookmark_border
the Hustle bustle of Christmas is Over, the season is still here ....  is just around the corner and what a celebration it will be ... December 31st will be a Blue MOON and as we look forward to a make the right CHOICE ~ a new ye ...
Real Estate General Information over 13 years ago
bookmark_border
2008 as compared to 2007 Sales in Lewiston ID & Clarkston WA ~ the Lew ... Current Period 01-01-08 through 12-31-2008  these are just residential SOLDS  in the LC Valleytotal SOLD:   720     total volume   126,698,706  average price $1 ...
almost 14 years ago
bookmark_border
Just another Rainy Sunday... 2 Open Houses! It is hard to get out and do the Open Houses ... especially when it Rains... and today is a Rainy Sunday!  But those Open Houses genertate business and make us ...
format_quote