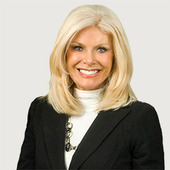 Linda Secrist is the premiere, top award winning agent in the Salt Lake City, Utah area. Linda specializes in luxury home sales and has consistently ranked in the top 1% of Realtors nationwide!

Get to know Linda Secrist

With extraordinary drive and perseverance, Linda Secrist has achieved tremendous success in real estate. She started out by closing over six million dollars in her first seven months and was chosen Rookie of the Year. In 1997, after only 4 ½ years in the business, Linda received the prestigious Salt Lake Board of REALTORS® Salesperson of the Year award.   Linda continues to be ranked in the top 1% of the best agents in the nation and has grossed over half a billion dollars in home sales since 1992.  In 2006, Linda achieved the remarkable feat of closing over 62 million dollars in residential real estate.  In 2008, Linda Secrist & Associates received the esteemed, Salt Lake Board of REALTORS® Small Group of the Year award. In 2009, Linda Secrist & Associates were honored to receive the Prudential Award as Top Realtor and Team Of The Year.

SIX Urgent Home Fixes NOT to be Ignored!

6 Things You Should Do Before Buying A Home

A large portion of Linda's business comes from referrals from past clients, because Linda demonstrates strong ethics, wisdom, and concern. Her experience with life and with people has given her a wonderful common sense approach and a deep sense of concern for her clients.