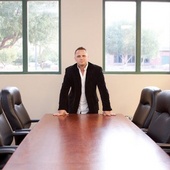 Travis & Summer Flaherty are largely recognized in the industry for their systems, training platforms and expertise developing large organizations.

Get to know Travis Flaherty

Hello, my name is Travis Flaherty and I am dedicated to growing as a leader & making a positive impact in those around me. I believe in empowering others with the confidence and belief to begin living their LEGACY!I am very passionate and live life to the fullest! Your only here once so make sure you leave with no regrets!I have been happily married 10 years and have four amazing children who inspire me to want to do better every day. I am an Entrepreneur at heart. I love the challenge of building something from the ground floor. I always have something in the works;)I don't have a tolerance for negative or mopey people! Avoid negativity like the plague!I consider myself to be an expert in the art of connecting, marketing and branding.Choose carefully the people you let into your inner circle! Always align yourself with people who inspire and lift you up! I believe that everyone needs a mentor in their life to stretch and help them grow! One of my favorite philosophies in life is to focus on the relationships and everything else will fall in place. *If you would like to receive a FREE video series on the core principles of LIVING A LEGACY, Click Here--> http://www.retiremelegacy.com/

bookmark_borderbookmark
ActiveRain Community – about 10 years ago

The blessing of Integrity: Where are the heroes?

What does the Trans-Atlantic Pipeline have to do with your business?

Travis A. Flaherty – MLM Trainer/Author/HBB ConsultantTravis has been given the name as a "Rainmaker" by his peers and colleagues. He has an uncanny talent to create energy, excitement and a following where ever he goes. He was repeatedly a top producer in the MLM industry before becoming a Master Distributor in 2008. He has also served as a consultant to several Network Marketing Companies. He is best known for his ability to harvest large organizations by implementing leadership development and systematic training platforms. Travis is also considered an authority in the area of social media behavior - and is recognized as a social media expert. As an MLM trainer, Travis has spoken to thousands around the world, inspiring individuals to begin living a life of abundance. Travis is also largely recognized for his virtual seminars, articles and videos dedicated to leadership development and successful practices of a Network Marketing Professional.In 2009, Travis and his wife Summer were featured in the popular industry publication, 'Your Business at Home', as one of the top Networking Professionals in the United States. They were also recently featured in 'Success From Home Magazine' in January, 2011, highlighting their story on achieving the prestigious ‘Double Platinum’ Status with their company in only 6 days!Travis has repeatedly built top producing organizations around the world. His saying: ‘Growing leaders as opposed to maintaining followers’ has become a main focal point for recruiting into his organizations. Travis believes the number one way to grow an organization, is to grow the people IN that organization. One thing is for certain, if you have the pleasure of working with Travis in any capacity. You will certainly grow from this experience.Travis will be releasing his new book 'Living a Legacy, Without Limits' in the Summer of 2011.
Languages (1)
Resources (1)