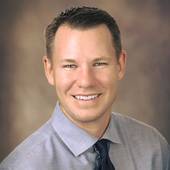 Get to know Tanner Mulvihill

Hello everyone.  About me.  I'm the owner of Bayfield Home Loans in Stafford.  I've been a loan officer for over 16 years and owned my own company for six.  A while back I visited a website of a Realtor in my area who listed a top 100 section about them and why they were interesting, though he started making things up after 8 (for example he claimed he invented Macaroni and Cheese) I still thought it was a great idea so here goes a quick list for me:

3.  I went to highschool on an island.  Vashon Island outside Seattle to be specific.

4.  I used to know John Ratsenburger (Cliff on Cheers) pretty well and used to baby sit for Susan Rutan who is an actress who has done roles like playing Brook Shields mom on Suddenly Susan.

5.  I'm 6 feet tall and I used to be able to dunk.  Unfortunately not anymore.

6.  My dad won a car hitting a hole in one.  Thats not about me but its still really cool.

7.  In the Marine Corps I was an intel Analyst.  Yes I thought Saddam had WMDs......sorry about that.

9. I graduated from Washington State University.

11.  I have done stand up comedy before.  It actually went over pretty well.

12.  I play guitar and have written some songs.  You might know of one I gave to another artist...its called Stairway to Heaven.

Are we there yet?

“Tanner Mulvihill is the Sr. Loan Officer and Owner of Bayfield Home Loans in Stafford, Virginia.He is a recognized expert on VA Financing and credits his experiences as a Marine in helping to shape his commitment to Veterans.

Tanner started Bayfield Home Loans in 2006 at the age of 30.As the son of a small business owner, Tanner knows how important each and every client is and is always grateful to those who place their trust and confidence in him.

When not steering the good ship, USS Bayfield Home Loans, Tanner enjoys spending time with his two boys Jamison and Caleb or on the golf course.”