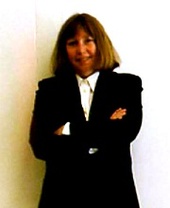 A top producing agent with McGuire Real Estate in Berkeley,Oakland,Alameda. Has helped over 300 buyers and sellers sell and purchase homes. Number 1 producer in her office for over 10 years.

Get to know Barbara Reynolds

So here's the low down.  Barbara Reynolds has been a top producing agent in the near East Bay for 13 years and counting.  She recently joined the Elmwood office of McGuire, from a Prudential California, where for the past 10 years, she has been the Top Producer in her office of over 70 agents, and in the top 2% of Prudential nationally.   In her travels, she has sold more than 300 homes in the near East Bay neighborhoods:  Berkeley to Oakland, Alameda to Piedmont, El Cerrito to Kensington.

In a previous life, Barbara was a copywriter and creative director for advertising, having worked at Hal Riney&Partners, Chiat/Day, and a host of others in San Francisco, New York and LA, and was actually one of the original team who launched the Saturn car. And somewhere along that 15 year road, she must have  picked up some things about how to "package" and market houses and Buyers.

Her listings in Berkeley/Oakland/Alameda and environs typically sell well above the average agent's listings.  Luck?  Perhaps.  But maybe, just maybe, it has something to do with the way she markets, which is a little different than the rest of the corral.

And for Buyers?  Well, in the same way she packages houses, she prepares Buyers.  So they can be successful in the competitive East Bay real estate market ... whether it's a multiple offer situation or negotiating the bottom line price.

Of course, real estate isn't all she does.  She rides bikes, travels, putters in the garden, and loves to cook for her friends.  She's also on the Board of Trustees for her college, Beloit College in Wisconsin.

Her philosophy of real estate negotiation could best be distilled to what her father always told her and in the words of Teddy Roosevelt, "  Walk softly, but carry a big stick."

bookmark_borderbookmark
Local News and Events – over 4 years ago

The Premium Price for a Home in the East Bay “Flats”

bookmark_borderbookmark
Home Selling – about 5 years ago

The “Art” of Prepping a Home For Sale

bookmark_borderbookmark
Home Buying – over 5 years ago