0 Comments
2008 was the end of a long chain of government mistakes and the beginning of the current real estate nightmare.  The cause was simple, 20 years of bad policies and real estate lobbing to grow the homeownership rolls, specifically more minority, lower-income earners and those with poor credit rati...

3 Comments
What a bunch of DC dopes.  Tax cuts, spending increase, printing money, borrowing from China.  Until the DC dopes learn fiscal restraint neither the Real Estate or emplyment markets will improve. Call your legislators an tell the stop spending.

0 Comments
Stop asking congress to lower interest rates and subsidizing real estate.  Let's start a new way of thinking and a 20 year plan to remove all real estate subsidies and make real estate a sound investment for it's own sake and not any "cronyism" subsidies.

1 Comments
Sales are slow now and appraisers are keeping up with the business.  What happens in 2,3,5 years?  Becoming an appraiser is now more difficult that ever.  165 hours of specialized education, plus many states now have an Associates degree requirement, 2000 hours of experience, licensing fees, low ...

Don't touch my Junk - Whatever Happened to the 4th Amendment?

2 Comments
The Fourth Amendment (Amendment IV) to the United States Constitution is the part of the Bill of Rights which guards against unreasonable searches and seizures. The amendment specifically also requires search and arrest warrants be judicially sanctioned and supported by probable cause. It was ado...

Snakes in the house

1 Comments
One of rentals has black snakes visiting from time to time - INSIDE the house!  The tenants are European and don't seem to mind - keeps the mice down but I really like to know how to get rid of them.  :-)

I don't need your business... I WANT YOUR BUSINESS

0 Comments
After my first 5 years in the real estate profession I coined this slogan to separate myself from the crowd,  30 years later it has served me well. What does it mean?  It means that I make a good living practicing my profession as an Appraiser, Broker and Builder and I don't NEED any single trans...

What are we Eloi?

0 Comments
What are we Eloi?  How have we devolved into allowing the government to do "what they will, when they will" to us?  [re: airport frisks to all without probable cause]Is the Obama administration now the Morlocks and we the docile Eloi?I thought the government had to have "probable cause" before th...

Call your congressman - tell them No more real estate subsidies

0 Comments
Call congress TODAY!.  Tell your congressman you're ready to do your part in reducing the deficit.  Tell them you want all real estate subsidies sun-setted.  No more real estate tax write offs and no more mortgage interest deuction. The plan is to reduce them 5% a year for the next 20 years.  By ...

0 Comments
test.  testing to see why my blogs show all the HTML codes and keep apending to previous posts.
Previous 1 2 3 Next
Back to Top Archives
Rainer
9,867 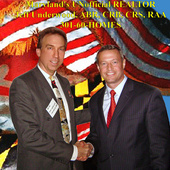