3 Comments
If you've been looking for a little piece of paradise to call your very own...this could very well be the place!  Like starry night skies, abundant wildlife, mountain views and areas rich in old west history?   This really is the place!   Located in Cochise County, Arizona, this fully-fenced 40 a...

When you represent the buyers...but know the sellers

0 Comments
Hi everyone!   I know, it's been a while since I've posted...but, I'm back! So, I'm sitting in my office on a very stormy day and my phone rings.  OK, nothing special about that.  But, it's the sellers of a property I'm representing the buyers of...we're in escrow.  I, as politely as possible, te...

8 Comments
I know, some of you are probably wondering where, exactly, I show property with all my "animal-related" posts...But, seriously, take a look at this little guy.    Yes, he's on a kitchen counter.    My buyers and I were taking another look at this property when this roadrunner showed up at the bac...

3 Comments
Many of you know I raise dairy goats...well, these two little guys are 1 day old about right now.   I just had to share.

Buyers: it is time to test the real estate waters...

1 Comments
A while back I blogged about the foreign investors who came through looking at property, mostly land, and looking for "deals."   Since then, it seems like our "home-grown" investors are out scouting out the deals as well. Is this the "turn-around" we've all been waiting for?   Who knows.  But, it...

Sellers: your home may not be ready for the market if...

0 Comments
If you really want to sell you home, it really needs to be ready to be sold.  Therefore, I have put together a list, based on properties I have shown so far this week, to let you know when your home is NOT ready. If you own three cars and two of them are broke down in the middle of your front yar...

Sometimes it really is the little things...

5 Comments
Yes, this is a picture of a frog.  But, this is not just any frog... this is the frog that "sold" a property this afternoon.   I know, I know, it sounds "fishy"...but this little frog did, indeed "seal the deal."   My buyers today came to look at property very tentatively, see, they thought ALL...

When two of your clients want the same property

0 Comments
For the past several weeks I've been working with two different sets of buyers who have been looking, essentially, for the same thing.  In the back of my mind has been the dreaded thought "what if they both fall in love with the same property?"  But, I thought that was a pretty remote chance. So,...

2 Comments
I took this picture right after it had rained and just before the sun went down last evening.  Since I've been out today taking listing pictures I had not had a chance to really look at it until now.  It just came out so nice I just had to share it.
Previous 1 2 3 Next
Back to Top Archives
Rainer
17,328 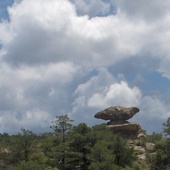